From Tabroom.com Help Center
Jump to navigation Jump to search 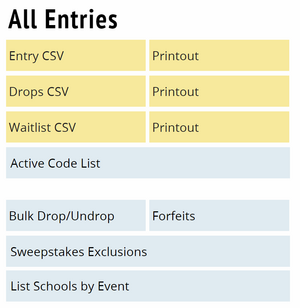 Screen to allow mass dropping of entries by toggling the Active column from Y to N.

This screen logs all forfeits that have taken place in a given tournament.

Allows for excluding certain entries' results from being calculated in sweepstake awards. The default is for an entry to count. Changing that requires toggling N to Y.

Generates a list of schools in a given event. 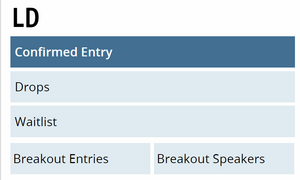 Confirmed Entry, Drops and Waitlist show entries for a given event that fall in each of those categories.

Allows the marking of entries to be eligible for breakout brackets.

Allows the marking of participants to be eligible for breakout speaker awards.

Print Roster - Produces a PDF of all entries in an event.

Print Actives - Produces a PDF of all entries in an event excluding entries on the waitlist or entries that have been dropped.

Labels - Produces a printout that displays an entry according to the display setting previously set such as entry codes, last names etc.

Side menu that lets you toggle between events.